Maria La Verda was born in 1958 in Breda, the Netherlands, even though her name might suggest her roots lie elsewhere. La Verda is a distinct personality that stands for expression, colour explosions and clean pronounced shapes.

From Flamenco to road bicycles and from travelling to photography, Maria La Verda is a distinctive Gemini, who is always up for new challenges and looking for new impressions where she gets a lot of her inspiration from.

After graduating in 1981 as an art teacher, she knew her life was going to exist out of more than only teaching. That explains the different disciplines she looked into, such as designing jewellery and clothing and then later on bags. In 1984 La Verda started her company Andromeda / Dessini bags, which was very successful in the early 90s.

A long cherished dream coming true, brought La Verda to the south coast of France, where she ran a gallery with bags and her own paintings. For two years Maria continued working there on her designs, plans and development. And that is still visible nowadays! 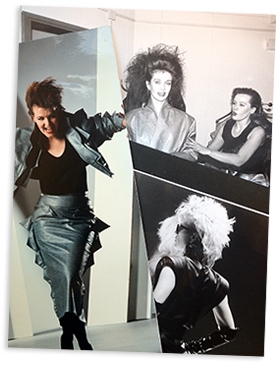 In 1993 'Maria La Verda bags' was a fact! From this moment on, her designs were to be admired in every big city in the Netherlands. Later on the success expanded to Denmark, Switzerland, Germany and Belgium and the rest of Europe will follow soon. Participating in major international fashion fairs, such as the Modam, Fashion items, the Igedo and Europa Kado, led to a lot of fashion retailers and design shops selling her designs.

The bags of La Verda stand for a timeless design, they are lightweight, with distinct shapes and unique materials; striking designs that, on the other hand, are also highly functional. A lot of primary colours are used in her designs, often with a black base. The customer has the possibility to practically customize the entire bag when it comes to colour and material: design your own bag!

A 'Maria la Verda' for everyone!!